Emelianenko and Koklyaev. Fight of the Elements 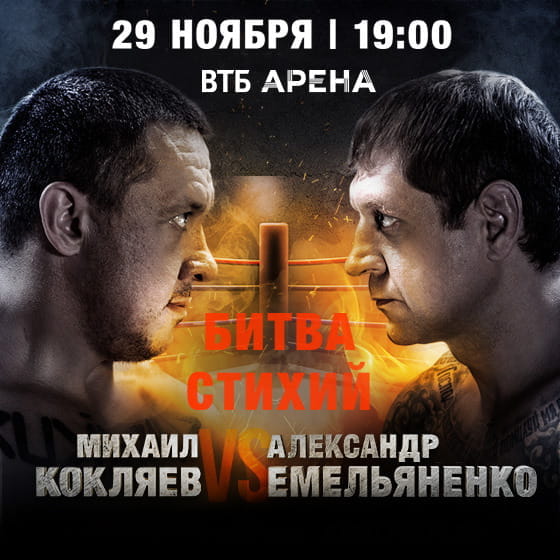 Strength or speed? Sports fans have had debates over the superiority of fighting skills for years! On November 29, we may get a convincing answer to this seemingly eternal question!

Alexander Emelianenko has participated in more than 100 fights in various martial arts styles! His name has been announced during all significant world tournaments without exception, this celebrated Russian fighter has gained love of the audience all around the world due to his spectacular fighting style and courage! Alexander rates his current physical shape as the best during the course of his career, and this means that on November 29 his arms will be faster than ever!

The name of Mikhail Koklyaev has long been synonymous with strength, pluck and character! Multiple winner of international tournaments in power extreme and one of the leading experts in the "iron" industry – a model to follow for all Russians, without exception, who know firsthand what power is!

Strength, speed, skill and the main thing – the true Russian character! Spectators at "Emelianenko and Koklyaev. Fight of the Elements" tournament at VTB Arena on November 29 will have a great opportunity to appreciate all of this!

The program of the tournament includes 6 fights in the most popular martial arts styles!