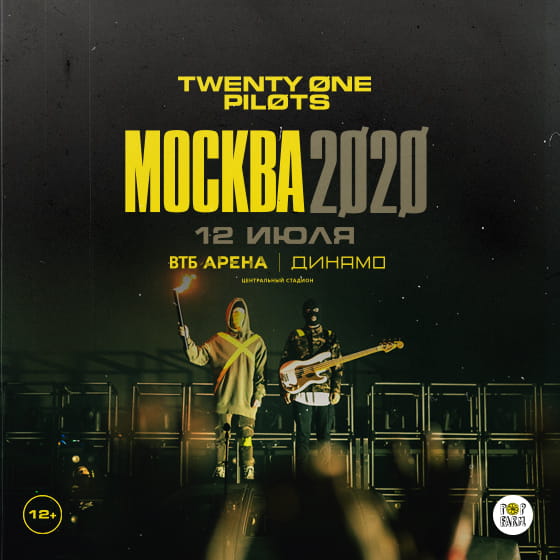 July 12 TWENTY ONE PILOTS return to Moscow with an exclusive show at the venue "VTB arena-Central stadium "Dynamo". After spending 2019 on the road with the busy THE BANDITO TOUR, the band was ranked number 36 on Billboard's Top Touring Artists list. Since the release of the fifth LP, "Trench," Grammy winners Tyler Joseph and Josh Dun have used constant relocations for spontaneous Studio sessions in different cities around the world. Their results were singles from the Location Sessions series: "the Hype (Berlin)", "Cut My Lip (Brooklyn)" and "Chlorine (Mexico City)", on which the musicians rethought their recent hits.

But the main emphasis of the Duo made on live, exporting to the countries of America, Europe and Oceania firm elastic alloy of rock, rap, electronics, reggae and everything-anything with the prefix "indie" and without. Masterly with the microphone, Tyler switches from bass guitar to keyboards and ukulele, while Josh behind the drums makes it clear that he is ready to knock on the terminator.

Performers-singles and groups of two or three people usually resort to all sorts of tricks to fill the huge stage area of many thousands of halls. But TWENTY ONE PILOTS do not need extras, dancers, musicians or inflatable pigs: two guys confidently win back all the space provided to. For the incredible activity, the Forbes reviewer called the Duo "the most laid - out and athletic band". The illusion is created that the stage breathes, then shrinking to an invisible capsule around the artists, then instantly flying beyond the most distant stands.

Generously endowed with acting talent, Tyler easily makes a metamorphosis from an autistic youth to the Lord of the universe, while remaining himself. The whole hall is engaged on backing vocals, and the strongest of the dance floor manage to hold Josh's crowd-surfing platform with a drum set. So if the soul requires catharsis, then it's time to buy a ticket to the show TWENTY ONE PILOTS on July 12-SoldOut is not far off.
share
Уведомление о старте продаж
Уведомление о старте продаж
Upcoming events
Concert
ChaiF
30 oct. 20:00 Small Arena
1,500 - 15,000 . Buy ticket
Concert
NIall Horan - Nice to meet ya tour 2020
18 nov. 18:00
Subscribe to the sales
Concert
OneRepublic "Live in concert "
20 nov. 18:00
Subscribe to the sales
Concert
KINO
21 nov. 20:00 Small Arena
2,200 - 12,000 . Buy ticket
Concert
KINO, day 2
22 nov. 20:30 Small Arena
3 500 - 5 000 . Buy ticket
Concert
Noize MC "Everything is like people"
28 nov. 19:00 Small Arena
800-3300 . Buy ticket
Full list
This site uses cookies in order to analyze traffic, user activity and optimize the site. The data processing is carried out in accordance with the Personal Data Processing and Protection Policy of JSC "MC Dynamo".