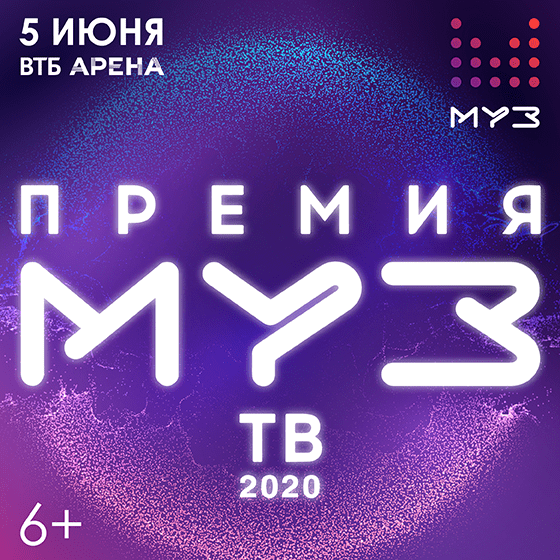 The iconic annual national television award in the sphere  of popular music "MUZ-TV AWARD 2020" will be held on June 5 at VTB Arena and will combine all the best in the music industry.

"MUZ-TV AWARD" is always an enchanting global supershow, which attracts millions of viewers at TV screens annually. Over the entire history of the Award, 290 coveted plates were awarded to the best performers, more than 150 artists, including world-class stars, opened their unlimited possibilities; more than 20 outrageous hosts appeared on the main stage of the ceremony in different years.

The audience of the MUZ-TV 2020 AWARD will see the unforgettable fantastic show: the latest international sound innovations and light special effects, unexpected decisions in the Director's production and the most vivid emotions — you can see it only once a year!

The organizers are preparing a lot of surprises: guests of the ceremony will hear not only the hits of their favorite artists, but also will see performers in the most unexpected roles.

Arman Davletyarov, General Director of the MUZ-TV channel and Director of the Muz-TV AWARD: "Those who will come to us on June 5 for the MUZ-TV 2020 AWARD will be shocked from the very beginning by what we have done. It has never happened not only in Russia, but also in the practice of world music ceremonies!»

The names of the nominees MUZ-TV 2020 AWARD will traditionally be announced at a Gala dinner in April. On the same evening, the audience will start voting for their favorite artists. After counting the votes of fans and experts, the names of show business stars will appear on the coveted awards.