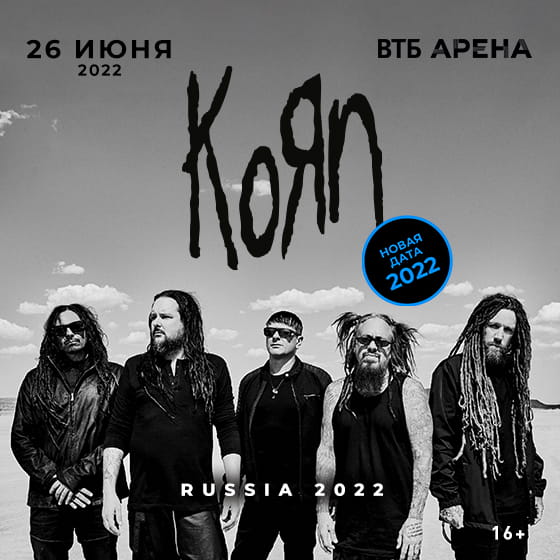 KORN - the world-famous multi-platinum nu-metal band returns to Russia in June 2022 with stadium shows in support of "The Nothing" album and also with their super hits!

KORN started to change the music world when they stormed onto the metal scene with their debut album of the same name in 1994. The band became a real breakthrough, and for more than a quarter of a century, it has been one of the most influential bands in the world music industry, influencing the creation of many bands and mass culture.

KORN has released 13 studio albums, sold more than 40 million copies, many of them platinum and gold, won two Grammy Awards and the MTV Video Music Awards, completed tours around the world and set many records that are unlikely to be ever surpassed!

An album like "Follow the Leader" (1998) was a practical primer on what alternative metal and nu-metal should be. This album was a massive influence on the bands of the time. All their previous albums were successful, but "Follow the Leader" was a genuine phenomenon, debuting at number one on the Billboard 200. The album "Issues" (1999) followed. It is rightly called the great KORN album. For many fans, this is the highest point of KORN creativity. Through the years of its existence, the band had many things going on: from a return to the youth mainstream with "KoRn III: Remember Who You Are" (2010) to a more risky dubstep trip with the album "The Path Of Totality" (2011). However, all of KORN's albums were incredibly successful and reached the top ten of the Billboard 200.

On September 13, 2019, KORN released their thirteenth album, The Nothing, full of emotional revelations, with a classic nu-metal sound. The album debuted at number 8 on the Billboard 200 chart, with approximately 33,000 copies sold, receiving high marks from critics and fans of the band.

Vocalist and songwriter Jonathan Davis, guitarists James "Munky" Shaffer and Brian "Head" Welch, bassist Reginald "Fieldy" Arvizu and drummer Ray Luzier continue to push the boundaries of the rock industry to this day. KORN's level of influence goes beyond awards and platinum certifications. KORN is a true innovation. KORN is becoming a household name. KORN represents a new archetype and revolutionary musical innovation in the flesh.