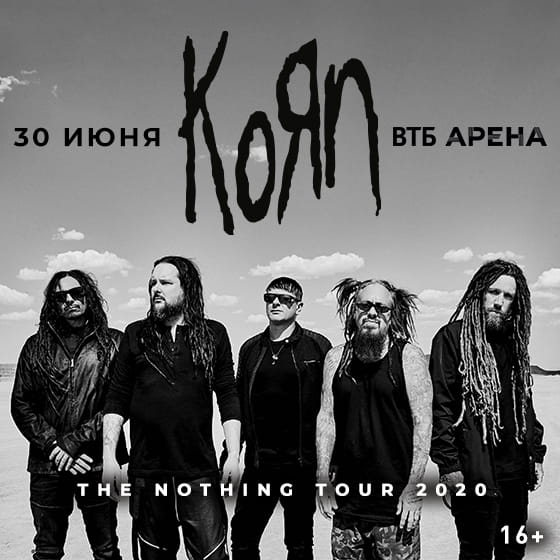 KORN, the world-famous, multi-platinum nu metal band, returns to Russia in June 2020 with stadium shows in support of the new album The Nothing and its super hits.

KORN began to change the industry storming into the world of metal music with the debut album of the same name in 1994. The band was a real breakthrough, and for more than a quarter of a century has been one of the most influential teams of the world music industry affecting numerous bands and popular culture in general.

KORN has released 13 studio albums with more than 40 million copies sold, lots of which were certified platinum and gold, has earned two Grammy Awards and MTV Video Music Awards, has been on tours all around the world and set various records, which are not likely to be smashed!

On September 13, 2019, KORN released the thirteenth album The Nothing, full of emotional revelations, with the classic nu metal sound. The album debuted at number 8 on the Billboard 200 chart with about 33,000 copies sold, received high praise from critics as well as from fans of the band.

KORN is a genuine pioneering band.

KORN is a new archetype and revolutionary music innovation incarnate.