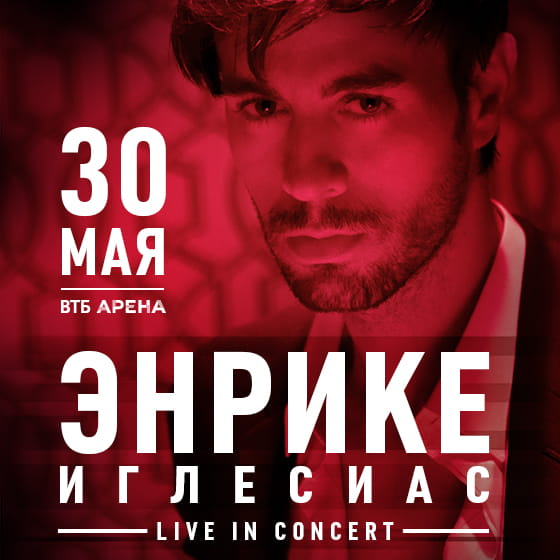 A true legend of Latin American pop music, a multiple winner of the Grammy and American Music Awards, an idol of millions, charming and talented - after a long pause, Enrique Iglesias will perform the only concert in Moscow on May 30! You will hear  as well-known hits as songs from the new album, which is expected to be released this year.

Enrique Iglesias rightfully holds the title of the most successful artist in the Latin pop genre - 154 of his songs headed the Billboard charts, it is an absolute record of the chart’s history! During his career, he released 10 studio albums and 3 Greatest Hits albums, which were sold more than 180 million copies worldwide. Iglesias has collaborated with such superstars as Pitbull, Whitney Houston, Lionel Richie, and many others. He has a huge number of prestigious awards, such as the Grammy Awards and Billboard Awards.

Each of his tracks and videos draw the attention of millions of fans. His clip Bailando has become one of the most viewed on Youtube, gathering 2.4 billion views. And the total number of views and listens on Youtube/VEVO and streaming services is 28 billion!

Moscow concerts of this amazing artist always extremely succeed. Each of them invariably becomes an unforgettable bright show, each time surprising even experienced audience. The artist himself emphasizes his special and very warm attitude to Russia every time – it is no wonder, because he is married to a Russian woman Anna Kournikova and they have two children. His super hits beloved by millions of people, incendiary rhythms, Enrique’s incredible voice – there is no doubt that we are waiting for the hottest concert of the year, which just can’t be missed!